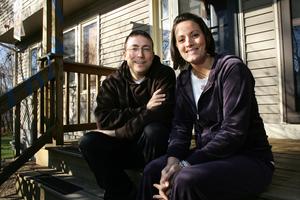 I am writing to share the story of my husband Steven and his transplant story.

My husband is 36 years old and has Alport’s Syndrome. His family doesn’t seem to have it quite as bad as others we’ve known, with obvious hearing or vision loss. He has kept good track of his health and was seen regularly by a nephrologist.

This past Labor Day, September 2011, Steve was admitted to Beth Israel Hospital in Boston with failing kidneys. A biopsy confirmed Alport’s, and also ruled out any other causes for the sudden rise in creatinine level and declining health. He was discharged with a slew of appointments at the Transplant Center, something that was very overwhelming and scary to us. We did not think we would ever be faced with a transplant as such a young age.

Lucky for us, our very good friend, neighbor and mother of two, Paula, offered us the best gift…to go ahead and be tested to be a donor since they were both an O blood type. We knew it was a long shot…what were the chances Paula, who literally lives 5 houses down, would be a perfect match?

Well, she was. Every blood test, scan, and appointment proved she was the best match possible for Steve. We needed to look no further and avoid a 3-5 year wait for an O type kidney.

In the meantime, Steve’s health declined to a point in which he was admitted to the hospital again, for a catheter to start dialysis. His kidneys had had enough. Lucky for him, he only had to do dialysis for 3 weeks while Paula finished up her testing and preparation for the transplant procedure.

Both went into Beth Israel on November 16th 2011, and came out with flying colors. A very successful surgery, immediate results of better health and they walked out together, discharged 5 days later.

Through all this, Steve continued to work, come home and care for his 2 small children. He was a hero in our eyes and is feeling wonderful 3 months later. Back to work, feeling like a new man.

We continue to see Paula, and thank God everyday for meeting her and having her in our life.