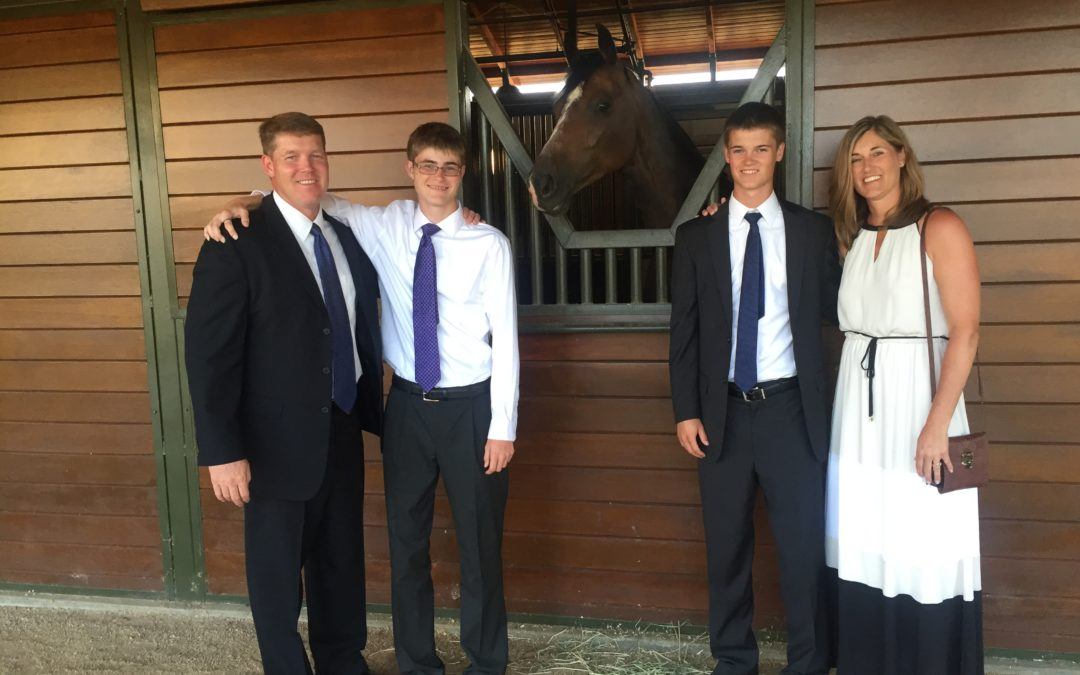 Below, Terri shares how her sons’ hearing loss lead to their Alport syndrome diagnosis.

Terri’s Story
As a middle school aged child, the doctors discovered I had blood and protein in my urine. After running various tests they never determined the cause (at least as far as I knew). As life went on, I would forget about “this problem” until each time I was required to have a urine test. One of those times was as an athlete in college and then again eight years later when I was pregnant with my first child. At that point, I was referred to see a nephrologist. Since I was an otherwise healthy person, a biopsy was never done. The doctor monitored me on a regular basis and put me on some medicine.

As a new mom, I noticed sometimes that my son’s wet diaper looked dark and I wondered whether he had blood in his urine. When Jake got a little older, I asked his pediatrician to test his urine. They found that he had blood and protein in his urine also and they referred Jake to see a pediatric nephrologist where he had various tests done. Nothing significant was discovered and life went on as normal for several years until I received a call from the elementary school nurse. She told me that my younger son, Brett, had failed his hearing test and suggested that I bring him to see an audiologist. I asked her if she could test my older son’s hearing since I had been noticing that he had been saying “What?” a lot. I had been dismissing it as just being tuned into the television and not to what his mom was saying. The nurse called back with the news that Jake’s hearing was worse than Brett’s.

Our appointment with our audiologist confirmed that both boys had hearing loss and Jake would be a good candidate to start wearing hearing aids. In my discussion with the audiologist, I remembered that one of the tests the pediatric nephrologist had us do was a hearing test. I thought it was strange at the time but since the results were normal, no discussion was done on the reasoning of that test. I mentioned this to our audiologist. He advised me to get my boys back in to see a pediatric nephrologist right away. He explained that in the past he had a young patient who had a kidney disease that was related to his hearing loss. Through our audiologist, we were led down the path of discovering our sons had a genetic kidney disease.  A skin biopsy was done on Brett that confirmed that the boys had X-Linked Alport syndrome. We were grateful that our audiologist was familiar with this disease and advised us to see a nephrologist so that our boys could start getting treatment and being monitored.

Currently our boys (now 18 and 16) are doing great with their hearing aids and their medicine. They are in Stage 2 of their kidney disease. They see their nephrologist once a year and do their lab work twice a year. They continue to see their audiologist every year also. They are both on their second pair of hearing aids that seem to be working out really well for them. We have a good relationship with both doctors and we are thankful for their support.

Alport syndrome and Hearing Loss
We know that the collagen make-up of the basement membranes of the cochleas (inner ears) is abnormal in people with Alport syndrome.  However we don’t fully understand how this causes hearing loss, or whether the hearing loss can be prevented or reversed.

Bilateral sensorineural hearing loss is often one of the first symptoms of Alport syndrome. It is never present at birth but often begins to manifest itself by late childhood or early adolescence, usually before kidney failure begins. A person with this type of hearing loss finds it difficult to hear and understand speech or interpret sounds, especially over background noise or when the speaker mumbles. Not all families with Alport syndrome will experience hearing loss.

For patients already experiencing hematuria, unexplained hearing loss is a very useful sign. When combined with family history and testing, sensorineural hearing loss can help confirm a diagnosis of Alport syndrome. Hearing loss is progressive but can usually be helped with hearing aids, although efforts should be made to protect ears from noise exposure that can cause additional hearing loss. Progression of hearing loss often relates to declining kidney function; therefore, it is important for patients with Alport syndrome to have their hearing checked regularly.

Watch the blog this month for more articles related to hearing health!