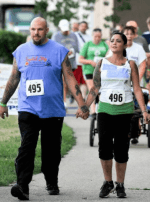 When I was a senior in high school I started to become sick. I had just lost my father a few years prior and our family had barely started the process of trying to recover from that. I was just a rebellious kid who was terrified knowing that something wasn’t right with my body.

I hid my symptoms for many months until there was no way to hide it anymore. I was hiding my face in my locker to catch my breath and throwing away stained pillow cases at school from a bloody nose in my sleep. My skin was turning yellow and I had bruises all over my body. It wasn’t until one day in class that I passed out and I was sent to the nurse’s office with extremely high blood pressure. Everything was a daze for me from that point on. All I remember next was waking up with a dialysis port in my chest and my family staring at me. I was told that I have a very rare kidney disease called Alport syndrome. They had a name for it but even the doctors didn’t know what it was. All they could tell me was that it is the reason I have poor eyesight, needed to wear hearing aids, and now needed to have dialysis 3 times a week until I received a kidney transplant…. at the age of 17.

It seems the next few years after that were just a blur as well. One big awful blur of emergency room visits at 1am, my mother carrying me on her back to get me down the stairs to the car, pain from multiple life threatening infections, more confusion than any kid should have to experience, along with lots and lots of missed events that every kid should be experiencing at that time in their life. I missed most of the second half of senior year. My mother was dragging me out of bed to get to school and begged teachers to pass me so I could graduate. I went to prom with another dialysis port in my belly, dangling under my dress so that no one could see it. I fought so many rumors about me because my appearance was dwindling in an awful direction. Teachers, peers, friends…. no one could begin to understand what it was that was going on in my world. And all I could tell them was that I was happy they didn’t understand. Because if they did, then that means it was happening to them too.

I continued to live my life the best I could. I lived by the motto “I refuse to live my life around my sickness, my sickness has to live around me.” One of the greatest things my mother taught me was “to just put on some lipstick and show up”.  And that’s exactly what I did for years. Every Friday I came home from dialysis, got dressed, and I went to a dance club with my friends. I couldn’t always dance but I showed up looking the best I could. One Friday night on July 20, 2001, I was at the club and I could hear my brother yelling at the doorway to let him in, that he needed to find his sister. I turned around and all I could understand over the music was “LISA!!! WE HAVE TO GO!… KIDNEY!…  HOSPITAL!!!” … and I walked out… and followed him home in silence. My mother was standing in the doorway with her eyes bigger than dinner plates. I went upstairs and put on fresh lipstick, and packed for Loyola Hospital to get my new kidney. I watched the helicopter land just outside the hospital window. And I watched a man carrying a big red cooler with MY kidney inside it. I also watched as one family member after another showed up. My aunts, my uncles, my cousins…. they all had one hand on my gurney as they pushed me into the operating room.

When I woke up from the transplant I knew I had a big recovery ahead of me, but I instantly felt like a new person. It was the most amazing feeling I had ever felt. My doctor told me about the girl who had saved my life. Her name was Danete and she loved horses. She died in an ATV accident and sustained a head injury. She saved several people’s lives when she lost her own. Thanks to her family who chose to donate her organs. I would not be here today without her.

From that point on my life was amazing. I felt good. I suddenly had my freedom back and I said good riddance to dialysis. One of my favorite days was the day that my bedroom was turned back into an average bedroom without machines and tubes. I slept an entire night without hearing beeping sounds from the dialysis machine. And as every great story goes, 5 years later, I met my husband. He accepted me and all my complicated history right off the bat. He understood that even though I was awesome at that moment in my life, anything could change again at any time. It’s hard for anyone who has never experienced any kind of misfortune like this personally or in their family. It’s impossible actually. And it takes a certain kind of amazing person to not even blink and say “I will be there.” And he was…. when I got sick again.

Soon after we got married I started to have complications with my transplant. The ureter (the tube that connects the kidney and the bladder) had collapsed, and I was suffering with chronic infections. There is no light way to put it, but I was suffering in every way a person can suffer. There was nothing he could do but hold my hand through YEARS of hospital stays, multiple surgeries, and experimental procedures to extend the life of my transplant and avoid dialysis. The pain was so bad that I no longer was me anymore, but a shell of the person he once knew.

One night I was sitting at my computer on Facebook. I don’t know what compelled me to do so, but I typed into the search engine “Alport syndrome”.  All this time since I was 17 years old, I had been told that I had this disease, but they didn’t know what it was. It was so rare that I had never even met a doctor who had heard of it before. In fact, they didn’t know any better then, but they told me that females did not get this disease. No one knew how I got it, and my brother had also been diagnosed with it. He is currently waiting for a kidney transplant. Suddenly, I’m sitting at my computer and would you believe me if I said that there was a Facebook page called Alport syndrome Foundation of USA??? And one month after finding this Facebook page, I was standing on a hilltop at a park filled with people who supported and also suffered with this disease. Men, women, children, families, friends….. I thought I was ALL ALONE, and now I was standing at a finish line to cheer on my husband with a group of people doing a 5K to raise awareness. And the next year after that, I was able to join in. Amazing.

Winter of 2011 was rough. My husband came home from work one day and told me that he called the University of Wisconsin to see what he needs to know to become part of the transplant swap program. The way that works is that he would donate his kidney to someone who is in need to get me closer to the top of the list for a transplant. In January 2012, before a very big snow storm, he loaded me into the car for a 3 hour, 125 mile drive. It was much like the many times my mother had to carry me on her back when I was younger. I was sick with infection and I cried the whole way there. I was in the bathroom during the entire meeting. I was trying so hard to force my pain away for just a minute to try and get through this. When I returned to the office all I saw were big smiles on everyone’s faces. I looked at my husband and he told me that he himself is a near perfect match to donate to me directly. I was in so much shock that all I could say was “ok”.

As I said before, it takes a special kind of person to automatically give of themselves the way that he did with no hesitation. I never asked him. I never even thought of it. He did every single bit of the leg work on his own and all I had to do was wear some lipstick, show up, and get better. I will love you forever, Tim Murphy.

I am now 33 years old, and 2 years post 2nd kidney transplant, and decided that it is time to give back. After all, I have been given so much. This is where the Alport syndrome Foundation comes in. In the short seven years since its founding, the Alport syndrome Foundation (ASF) is finally raising awareness in the medical community, and helping patients afflicted to find doctors who can help, and, most importantly, form a community to let those suffering from this disease know THEY ARE NOT ALONE!

In August 2010, the ASF held its very first international Symposium on Alport syndrome in New York, which brought the world’s leading researchers on the disease together with affected families.  Although there is still so much research to understand on the transmission and progression of Alport syndrome, treatment for the disease is limited, and so far can only delay kidney failure by a few years. In order to help get the funding that we as a community so desperately need, I am inviting you to take part in the ANNUAL HEALTHY KIDNEYS CAMPAIGN. All donations will go towards finding better treatments and eventually a cure for Alport syndrome. I am asking you to consider a generous donation of $50-$100, but of course, any donation is so very much appreciated. I believe that the ASF is a worthy cause that will have a profound effect on the lives of so many people who are suffering from this disease.