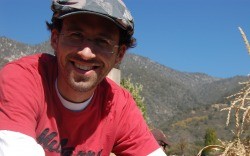 Five-year-old Jax crawls upon the floor, playing with Legos. His father, Matt, watched with contentment, visiting the place of where he grew up.

“It’s good to be back in Marshalltown when I’m healthy,” the father said. “This is my first trip back since all this happened.”

Matt was a happy-go-lucky child himself, who, at a young age was diagnosed with Alport syndrome – an inherited disease of the kidney.

It is estimated to affect at least one in 5,000 people, specifically men who carry the genetic mutation, and there is a high probability they can lose kidney function during their 30s or 40s.

“My family and I were always aware that I carried the defect,” Matt said. “I was seeing a doctor every year just to get a checkup.” As boys with the disease mature, they begin to show various symptoms such as high blood pressure.

Matt, meanwhile, relocated to California in 1995 where he ultimately met his bride, Ryan. Among the joys of marriage, he acquired hypertension. Some would jokingly associate the two. But this was no laughing matter. The groom was prescribed blood pressure medicine at 33 years old and that is when he knew something was amiss.

“I was living a healthy lifestyle for a man in his 30s,” Matt said. “But there were a few years I didn’t see a doctor because I was in between jobs and didn’t have insurance.”

Living in Burbank, he eventually attained success working for the Nickelodeon Network’s Interactive Division and wisely resumed his medical appointments, making a visit to Cedars Sinai Hospital in Los Angeles. Over the span of 18 months, his kidney function declined rapidly. This led to his physician confirming a transplant was inevitable.

“We didn’t realize how bad it was until a week before Tate was born,” Ryan said of their daughter, who is now 18 months old. “We didn’t know how sick he was getting … it was really a nightmare.”

But the notion of starting dialysis, having kidney failure and being placed on a national donor registry was too surreal.

“I was hoping the need for a transplant wouldn’t be as fast as the doctor said it would be,” he paused. “I thought about death and … I was scared.” Several family members were in the process of being tested for a donor match, when eight months into dialysis – and out of the blue – his cousin, who resides in Atlanta, Georgia, came forth with a selfless act of gratitude. And in September of 2009, he received her donated kidney.

The day following surgery, Ryan said her husband suddenly regained the color in his face. Since the young man’s failing health was of a gradual nature, his skin was sullen and gray due to the amount of toxin in his blood. The enormity of family concern wasn’t fully known to the patient.

“It wasn’t until recently Ryan told me she felt like she wanted to cry every day for about six months,” he said, “but she had to keep it together, and take care of our young son and baby.”

Fortunately, Matt had access to quality care and is monitored closely, currently taking more than $3,500 of prescription medications per month – a ritual he will adhere to for the rest of his life. “It’s cost prohibitive for some people who don’t have insurance because they can’t pay for the medicine,” he said.

Though still somewhat fragile, doctors say it may take a couple of years before he is fully recovered, but Matt feels good.

He also considers himself a survivor with a story to tell. “I could have lived a long life on dialysis, but that’s not living,” he said. “When you get off of dialysis, not to mention the recovery, you’re miserable, weak and you can’t eat the foods you want to eat – the good stuff I come back to Iowa for – like barbeque.”

Which is very coincidental, for his father, Lew, has long been associated with spicy food about the town.

Chuckling at those words, Lew offered a bottom line. “People have the choice to do something,” he said. “To be a living donor is the greatest gift in the world. It’s priceless.”

As modern science has evolved, genetic testing is a simpler task toward discovering diseases, as well as their risks.

“You have to listen to your doctors,” Matt said. And his biggest lessons learned from such an ordeal were the meaning of health and importance of a loving family.

“There are people who are alone in the world, that don’t have a support system and can’t get a kidney,” he said with earnest. “If you don’t have anyone to help, you are going to remain on dialysis while getting sicker and sicker. That is no way to live.”

As of March, there were 83,950 people awaiting transplants, according to the National Institute of Kidney and Urologic Diseases.

His mother, Susan, stressed that organ donation was important – and her son had an inner strength she never knew. “He also learned how much people love him,” his wife said.

Adapted from a story originally posted July 11, 2010 at Times-Republican. (http://www.timesrepublican.com/page/content.detail/id/526912.html)