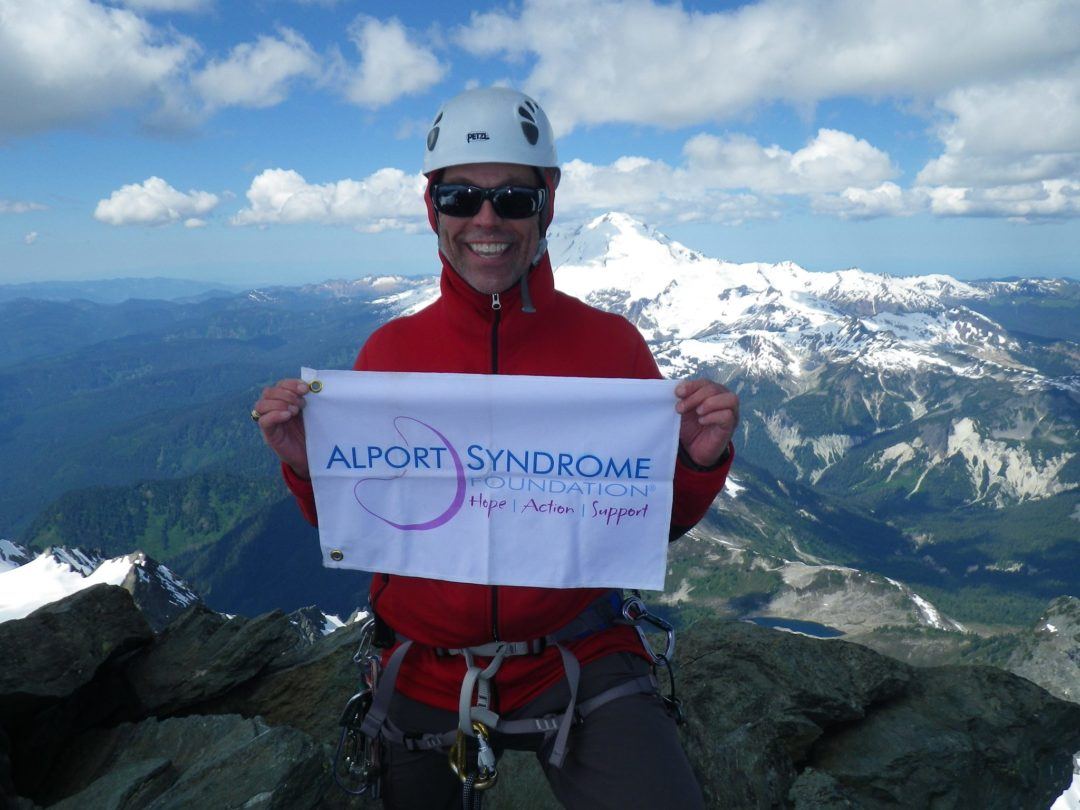 His bucket list includes climbing ten major mountains in ten years and raising $50,000 to help his daughter and others like her. “This is my idea of philanthropy!”

In mid-June 2016, Tom Denham climbed Mt. Shuksan in the Northern Cascade Mountains of Washington State. The rugged mountain is more than 9,000 feet tall and is covered in ice and snow. The climb involved rock climbing followed by an alpine glacier terrain before culminating in the imposing 700 foot summit pyramid. From the top, Tom had a stunning view of the surrounding mountains, including Mt. Baker, the mountain he climbed last summer. His other recent climbs include the Grand Teton, Mt. Hood, Mt. Shasta, Mt. Rainier, Devil’s Tower, and Half Dome. These are challenging and dangerous mountains, as Tom found out in 2009 when he fell in a crevasse on Mt. Rainier and had to climb out using ice axes!

How it started
What motivates a career counselor from eastern New York to spend his summers climbing these majestic and formidable mountains?  Tom’s love of mountain climbing began as a Boy Scout in a troop near the Adirondack Mountains. The troop did a lot of hiking and Tom ventured into more challenging mountain climbing, rock climbing and ice climbing. However, his serious mountain climbing didn’t begin until after age 40.

In 2007 Tom was driving to a business retreat on goal setting.  He knew that by the end of the retreat he needed to walk away with some solid goals so he decided to climb some major mountains. His first fundraising climb was in 2008 for a charity that used the money to let inner city youth have an outdoor backpacking experience. Tom raised money for the charity and in 2011 he dedicated his Mt. Shasta climb to a scholarship fund for a different local charity. For Tom, adding the charity fundraising to his climbs added value to the climbing experience. “And then I woke up one day and I realized ‘You have now raised $7,000 for other charities and you have not raised $1 to fight a disease that your own daughter has!’ And that was a turning point for me.” His daughter Rachel has Alport syndrome. Tom recognized that as a rare disease Alport syndrome receives limited funding and it was supported by a small organization. And while he still supports local charities on a smaller scale, he decided to focus the bulk of his fundraising on helping patients like his daughter, Rachel.

Making A Huge Commitment
Tom contacted the Alport syndrome Foundation (ASF) and made a commitment to raise $50,000 for the Foundation through an annual charity. His plan was to raise $5,000 a year over a 10-year period. In the past four years Tom has raised over $20,000, exceeding his goal so far. His commitment to fundraise for the Alport syndrome community requires months of extensive training. Rachel is now a high school soccer player and honor student. Her weekends with Tom often include hiking and rock climbing, creating great memories together as he prepares for his next climb. Rachel is proud of her dad’s efforts and even made phone calls to personally thank everyone who donated $100 or more to her dad’s fundraising efforts this year. She is learning her dad’s motto that it is important to give back and get involved.

Tom says his decision to fundraise through his climbs has been a great experience. He carries envelopes everywhere he goes that contain ASF brochures, a letter explaining his climb and a link to his online fundraising page. He adds his mailing address to the outside of the envelope so people can mail a check later.  He says he loves fundraising. “It’s not costing me anything to do this fundraiser. It’s just taking what I love to do and tacking on a fundraiser and putting envelopes in the hands of every single person I know.” Many people participate in sports and other activities, which Tom sees as opportunities to give back. “Whether somebody is running a 5K for the first time, or a marathon or a triathlon, they can tack on a fundraiser for it. Whatever you feel passionate about, turn it into a fundraiser. Get involved! The number one reason people don’t donate to non-profits is because they were never asked. A lot of people don’t like asking for money, but when you have your kid involved and you have this rare disease people are usually willing to help. If you ask, it is unbelievable the return rate I get! Most people will give something.” And Tom willingly returns the favor, contributing regularly to fundraising efforts by friends who donate to his climbs.

Taking Risks
Tom has a Bucket List of mountains that are both challenging and beautiful that he wants to climb. When asked if he has chosen which mountain he will climb in 2016 he said he has, but won’t reveal the name until January when he starts his next fundraising effort. Until then, as a career coach he shares his experiences with others to inspire them to reach new heights in their own lives. Tom has pushed himself hard and seen some incredible views from these mountain tops. He correlates that to life and says too often people place self-imposed limitations on themselves and miss the experiences and beauty of life. They postpone the joy.  He challenges people he talks with to “pick your thing – your passion, what inspires you – and do it!”, even if it involves reaching beyond their comfort zone. “The greater the risk, the greater the reward. Better to climb one major mountain than a thousand foothills. You’re not going to get the views I’ve seen by sticking to the foothills.”

Below are some photos of the amazing views Tom has seen on his climbs:

UPDATE: Tom will be climbing Glacier Peak in the Northern Cascades in July 2017. He is accepting donations through his online fundraising page.

To create your own fundraiser to benefit ASF, contact us.