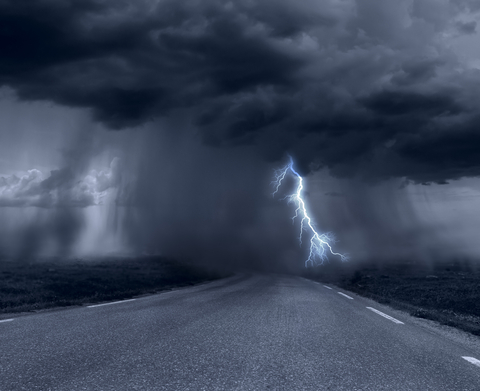 Note: This blog entry was updated August 30, 2019. Those preparing for major hurricanes are strongly encouraged to visit the FEMA website and additional kidney-related emergency preparedness links at the conclusion of this post.

When emergencies strike, we often feel helpless. For patients with renal diseases like Alport syndrome and other conditions requiring special needs, natural disasters and other unexpected events can be especially traumatic.

While 29-year-old Alport syndrome patient Kevin waited for a kidney donor, he conducted peritoneal dialysis at home every day. But during 2012’s Hurricane Sandy, Kevin faced an unimaginable reality when he lost power for close to a week and vowed to adequately prepare for the future. He recounts his experience below:

Hurricane Sandy or “Superstorm Sandy” was unquestionably one of the most shocking and unexpected emergencies of my adult life. After being diagnosed with renal failure due to Alport syndrome in July 2012, I immediately began hemodialysis at my local hospital and subsequently underwent additional surgery allowing me to perform peritoneal dialysis nightly at home. I had just finished training with the home dialysis machine, no longer requiring nurse assistance, when Sandy struck in late October 2012.

Over the course of a week, Sandy, a tropical wave originating in the western Caribbean Sea, quickly strengthened to a tropical storm and eventually, at its peak, a Category-3 hurricane. It made landfall on the eastern seaboard causing massive destruction in excess of $70 billion (yes, billion!). A state of emergency was declared in my home state of New York. New York City suffered explosions at power centers, mass outages, flooded streets/tunnels/subways and wind damage to buildings. Homes on Long Island, where I lived, faced similar issues. Some houses on the south shore of Long Island were completely obliterated. Highways and other state roads were impassable due to water and debris. Even those unfamiliar with Superstorm Sandy likely have seen the now infamous image of the Jet Star roller coaster in Seaside Heights, New Jersey, separated from the boardwalk amusement park, eerily laying desolate in the Atlantic Ocean.

Power loss due to hurricane-force winds was devastating. I was unable to perform dialysis overnight with my electronic cycler. I had the equipment at home to perform manual exchanges (filling and draining my abdomen via my abdominal catheter) but once the temperature in my home dropped to the mid-50’s, the dextrose solution used to regulate wastes and fluids in my body was no longer usable (unless of course you had a way to heat the bags, which I did not). Prior to the storm, I was informed by my power company that due to my at-home life-support dialysis machine I would be top on their list when it came to restoring power. Sandy’s widespread destruction made this a moot point. My street was cluttered with downed trees and power lines. Cellular and landline phones weren’t functioning so my family and I weren’t sure the clinic/hospital was even open.

I used a match to light my gas stove to prepare hot water for simple meals or a quick cup of tea. As I was not performing dialysis, I had to be mindful of my water intake and what exactly I was eating. As I was also new to the renal diet, I was honestly paranoid. Ultimately, I decided on canned tuna, oatmeal, Pop Tarts, dry cereal, cranberry juice and water as my go-to items. Thankfully, I had plenty of binders which I was required to take with meals. These pills helped removed phosphorous from my body, which was essential as my kidneys (and now dialysis equipment) could not. I violently shivered each day as it was absolutely freezing in my home and anemia from my failing kidneys only made things worse. I made frequent trips to my car to blast the heater and temporarily warm up.

Four days after the storm (and still without power) my block was finally made clear for travel. En route to the hospital, Target was the first store we saw with power and miraculously, they had Wi-Fi. I used my cell phone (charged via USB in my car, still lacking service) and their network to reach the dialysis unit. I received three hours of dialysis that afternoon, using their backup generator. That’s three hours after what should have been 40 hours of dialysis over the past four nights! The quick session alleviated the kidney pains I was experiencing and overall I felt fatigued but OK. Mentally, I was frazzled. I was told to be extremely vigilant with my diet moving forward until my body received ample treatment time again.

Why Prepare?
Power returned for me on the fifth day but the return to normalcy still took time as many roads and businesses were still closed due to damage and power outages. I realized I had not been prepared for this crisis whatsoever and determined to be better prepared for the next emergency. It also occurred to me an emergency could take many forms. Massive snow storms, flooding, tornadoes, other weather phenomena and even acts of terrorism could put any Alport syndrome patient in a very undesirable, unexpected situation.

If you have a personal experience you feel would benefit other patients with Alport syndrome, please contact us.