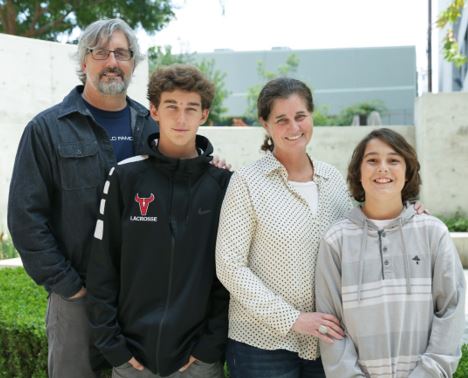 Unburdened and empowered. Those are my 13-year-old’s words. That’s how he reports feeling after the Alport Family Meeting in Los Angeles. I encourage every family affected by this disease to attend one of the upcoming meetings. It exceeded our expectations.

Lisa’s Story
Grant was diagnosed with Alport syndrome a year and a half ago. The week of his 12th birthday, two weeks before beginning middle school, he had a kidney biopsy and began wearing hearing aids. Sixth grade was tough.

As a family, we were both nervous and hopeful about attending the Alport Family meeting. We thought perhaps it would be too serious or emotionally difficult for Grant, as well as his 15-year-old brother. The road trip from San Diego to Los Angeles was quiet.

At the end of the first day, Grant said, “I just want to tell you that I had fun today, and that it is so comforting to meet people who have what I have.” After the second day, Grant’s reaction was: “I think I’ve been stuffing down a lot of things and it felt great to talk about them in a place where other kids totally get it.” More than anything, this was exactly what we had hoped for our son, a chance to really connect with others and feel less troubled by his diagnosis. Ryan and Kevin, the facilitators of the teen program for the weekend, were positive and masterful in their guidance of these teens and their siblings. They facilitated a great balance between fun, building relationships, sharing important information, and talking openly. Both my boys had smiles all weekend. Visiting the lab where current research is being conducted was fascinating and hopeful.

Our 15-year-old, who does not have Alport syndrome, hopes to one day be a kidney donor for his younger brother. He now feels much better informed about what he has to do to take care of his own health so he can be a great potential donor, and how he can better help his brother emotionally. After visiting Dr. Perin’s lab at the Saban Institute, he came off the elevator and hugged me, saying “That was so incredibly cool! We saw mouse kidneys!”

As a worried parent, it was extremely helpful to meet other families, speak with tremendously knowledgeable doctors and clinicians, and meet people who have successfully undergone transplant. I met some wonderful parents who have already reached out to share more through email. Several parents who did not bring their kids mentioned to me that they really wish they had. The camaraderie among the teens/young adults was great to see.

The Alport Family Meeting was so worth it! We all agree that the meeting seems to have brought us even closer together as a family. We are deeply grateful to Alport syndrome Foundation, and to all the doctors, researchers, ASF staff and families that participated.